By Venture Hive on May 31, 2016 in Uncategorized, Veterans 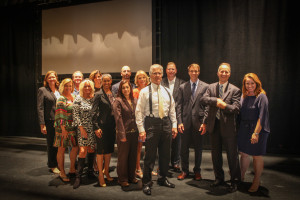 The SWARM! was the culminating event of the 12-week business training program hosted by Venture Hive. The Program is focused on recruiting and cultivating veteran and military family owned businesses in sectors closely aligned with Fort Walton Beach’s economic future.

“It is inspiring to see the level of homegrown talent that the Venture Hive Veteran program has developed here,” said Mike Anderson, Mayor of Fort Walton Beach. “It is these veteran owned-businesses that will continue to grow economic future of Fort Walton Beach as we look forward to seeing great things out of this class of graduates and future classes.”

Of the 10 companies that presented at the SWARM! Demo day, seven were local veteran or dependant owned businesses from the Fort Walton Beach area.

The first of these businesses to present was Tami Carr, CEO and Founder of Holy Kidz Camps – a camps and events-on-wheels nonprofit business  that focuses on providing families with safe and educational camps and events throughout the year.

Next to present was Clarice Lopez, a military spouse to a 7th Special Forces soldier, presented her company, Decurator. Decurator serves as a complete front to backend software and mobile selling tool for interior designers and furniture stores.

Mike Percy presented next by showcasing his company, Airtime Aircraft’s flagship product – the Cygnet. A personal recreational aircraft capable of taking off and landing on water as well as an additional passenger. Airtime Aircraft not only builds the aircrafts in Fort Walton Beach, but also uses local businesses for additional parts and resources.

Michael Veth, a recently retired Air Force Lt. Col. presented next with his company Aerial Autonomy. Aerial Autonomy looks to become the future for drone technology by building software for self piloting drones. According to Veth, the ability for fully autonomous drones can save the safety and inspection industry thousands if not millions of dollars per year.

View all posts by Venture Hive →