By Venture Hive on September 9, 2015 in Veterans 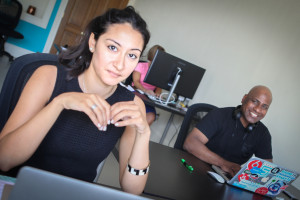 Camille Enrique (left) and Corey Hubbard (right) look to grow their technology based recruitment company, DreamHighr, with the resources and community of Fort Walton Beach.

FORT WALTON BEACH, Fla. – Leaving a comfortable high paying salary to take a “Leap of faith” in your own technology startup dream is a decision very few of us would be willing to take.  Even if you decide to build your company within the confines of a technology startup hub like Silicon Valley, New York or Chicago – the chances of success are only one out of every ten. However for two technology entrepreneurs, the sun, beaches and community of Fort Walton Beach has yielded opportunities not found anywhere else.

DreamHighr, founded by Corey Hubbard and Camille Enriquez, is one of the seven veteran-owned tech businesses that were selected to participate in the first class of Venture Hive’s Veterans Program sponsored by the City of Fort Walton Beach.

“The idea of DreamHighr actually came about 10 years ago while I was working as an executive recruiter for Morgan Stanley,” said Hubbard, a Navy veteran with over eight years of business development and operations experience within the staffing industry. “I would joke around with my co-workers that one day, everything we do would be done by a computer.”

The idea of automating executive recruitment drove Hubbard to seek out other technology entrepreneurs.

“Five years ago Chicago was just starting to really become something on the tech-scene,” said Hubbard.  “All of us that were interested in the industry would hang out after our day jobs and network. Now there are structured accelerator and incubator programs for startups – but just a few years ago it was a variety of individuals – from college students to CEO’s talking over drinks.

It was at this time that Hubbard made the difficult decision to quit his high-paying salary and pursued his entrepreneurship dream.

“I wasn’t like the typical Chicago startup entrepreneur. I did not have the luxury of a spouse or partner to support me. So I had to save money for a while and then quit and work on DreamHighr until I had to start working again to pay the bills,” said Hubbard.

It was at this time Hubbard would meet his business partner, Camille Enriquez. A recent MBA Certificate graduate, Enriquez did not want to take the safe route that many of her peers had after graduation.

“Ever since I was young I always felt comfortable taking on leadership roles. That is why I am comfortable with taking that leap [into entrepreneurship],” said Enriquez, a long-time Chicago resident with over seven years of traditional and digital marketing experience.

Previously the team of Hubbard and Enriquez had begun building DreamHighr at Chicago’s veteran-based technology incubator, The Bunker, located inside the Second Cities’ infamous building 1871.

“There is an amazing level of connecting at the Bunker. For example: if you need a coder; all you have to do is just ask the business next to you and they will have a contact for you,” said Hubbard.

However Hubbard and Enriquez found challenges in Chicago that made implementing their dream difficult.

“As good as a resource Chicago was, we realized we had become stagnant and were not able to employ coders and technology specialists at the salary an area like Chicago requires,” said Hubbard. “But then we saw the veterans program that Venture Hive was starting in Fort Walton Beach and it was the change we needed to grow.”

Hubbard and Enriquez believe the relocation, education and local connections made through the Venture Hive’s Veterans Program will provide DreamHighr the resources to grow into a major player in the professional recruitment market.

“We are incredibly excited for this opportunity that Fort Walton Beach has provided us,” said Hubbard. “I am even more excited to be part of the beginning of an emerging technology industry in Fort Walton Beach that will have a huge impact in the entire region.”

View all posts by Venture Hive →